It’s The End of the World As We Know It, and I Feel Fine

When I was in college, I took a class from my favorite professor (the then-reserved Bill Moulder) on Daniel and Revelation.  I had been looking forward to the opportunity for some time, since level-headed wisdom on apocalyptic literature is mighty scarce.  But I wasn’t ready for the curve-ball he threw at us in the first session.  After making some introductory comments, he passed out the syllabus and explained that we’d need to read William Golding’s classic Lord of the Flies by the next class session.  What?  Why?

Owing to our status as whiny college kids, we were grumpy about having to read “a whole book!” in just a few days.  Was this English class, or Bible class?  Furthermore, many of us wouldn’t even darken the door of the bookstore for at least a week!    How could our otherwise friendly prof do this to us?

Even so, I’m an overly dutiful person, so I slogged through it, wondering all the while what this had to do with God and the Bible (Ol’ Bill was leading me right into his net).  I showed up to the next class session ready for a heady discussion of comparative literature/theology, and all he said was, “The book you’ve just read is a good example of apocalyptic literature”.  Then he cleared his throat and started lecturing about the Ancient Near East.

My sense of frustration lasted for quite a while, but I eventually saw the brilliance of his move.  Because no one divides Lord of the Flies into chapter and verse, and no one correlates characters from the book with historical figures, and no one works up a giant wall chart of future history based on Golding’s imagery.  They do, however, ask pertinent questions about the time and place where Golding wrote, and try to understand his point.  They wonder about the intended significance of the symbolism at play (for example, the boys are– in the end– rescued by a large military force), and allow themselves to be moved by the story.  When reading apocalyptic literature, the author means for us to be provoked by the larger themes and leave the details to sort themselves out.  To evaluate the perspective of the book, and to consider how we are implicated in its message. 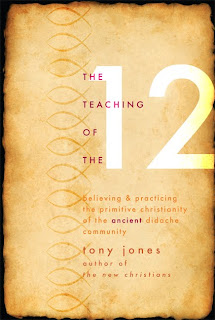 So when I got to the last chapter of Tony Jones‘ new book on the Didache, I was very impressed.  Because Tony gets it.  Even better, the compilers of this ancient document of the very early Christian church (probably pre-dating even the Apostle Paul’s letters) understood why the future mattered.  But, like the other bits of instruction gathered in the larger collection of teachings, the words about the end times are direct, rather than prosaic.

Taking a mere 20 minutes to read aloud, the Didache is refreshingly simple.  It is less about studying, and more about living.  Less about preaching, and more about practicalities.  And it leans away from Paul’s seeming perfectionism toward an ethical system that is much more manageable– ‘do the best you can‘ is a dictum that is mentioned more than once.

So when the Didache community considered the end of the story, and all of the apocalyptic prognostication that existed then (just as now), they were refreshingly truncated in their advice.  Stay faithful.  Be true.  And (as Tony summarizes), God wins.  And I love that Tony follows this lead by brilliantly stopping his chapter short with this quote from a modern day Didache devotee:

“These people weren’t sitting around waiting for God to rapture them out of there… they were doing everything they could to live in the faith and make the world a better place.  They weren’t concerned with when Jesus would come back.”

Don’t bother telling Tim LaHaye and his popular Left Behind franchise this, though.  Because he already knows that steady, faithful, sacrificial, quiet Christian living will never sell like salacious, effusive, political, doomsday drama.  You see, the truth is that there is no secret or encoded information which God is trying to hide from us to keep us from understanding the future. No, the divine conspiracy is happening right in plain sight: the message that is overwhelming to people is the one that invites us to live after Jesus.   Which is, in the words of another professor, simple, but not easy.

[Tony's book was a great read-- as disarmingly simple as the Didache itself, and even more welcoming.  He masterfully weaves together ancient historical background, contemporary concerns, and examples of modern practitioners of the Didache teachings.  It's available for a steal on Amazon, but the publisher is doing some serious group discounts.  You can read more about it from the other participants in the blog tour.  ]

Posted in: apocalyptic literature, didache, eschatology, stake in the sand

2 Responses to “It’s The End of the World As We Know It, and I Feel Fine”