I’ll just say it up front:  I’m a raving, stuttering, embarrassing fan of Russell Rathbun.  His unbelievably funny and insightful work Post Rapture Radio is one of my favorite books, ever.  And the podcast of his sermons (along with his co-pastor Debbie Blue) is a deep well of provocation and artistic expression.   When I’ve met him on a couple of occasions, I’ve come across as exactly the overly excitable fanboy that I am. 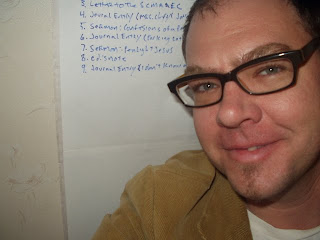 So when his publisher offered me an opportunity to review his latest book, I of course jumped at the chance.  But as I started reading it, I needed to adjust my expectations for this very short and very direct book, nuChristian.

I’ve spent hours and days listening to Russell’s sermons.  In that time, I’ve gotten into his head, and he into mine.  What I’ve come to love about him most is his arid humor and surreptitious indirection:  he rarely says what he means.  Instead, he has the courage and wisdom to hide his point.  He’s a master of sarcasm and irony, which regularly leaves me bereft at the conclusion of one of his concise sermons, wondering, “What is he up to?,” and hitting repeat.  So to see him writing directly, with headings and bullet points and and call-outs and thesis statements was fairly unsettling.  It is illuminating, no doubt, and clarifying for those interested in his philosophical underpinnings and theological method and points of application, but I was a little sad that the mystery had been revealed.

Of course, the content he delivers is strong.  Most especially his sketch of intellectual history:


Pre-Modern:     God as ground of everything
Modern:            Reason (not God) as ultimate
Post-Modern:    No common foundational assumptions

which illuminated the shifting pieces of history, the interplay between them, and the world in which we find ourselves.  And while such generational/demographic delineations are generally odious to me, I found this one to be different.  Rathbun walks the fine line of expaining a shift in thinking that is more psychographic (thanks to emergence thinker Deanna Doan for that insight several years back) than demograpic, but which is undeniably demographic by virtue of that clock of history on the wall.  Most notably (and not surpisingly, given his hermeneutic), Rathbun shows his greatest strength in shifting the definition of the Bible from ‘a book of answers’ to ‘a book of questions’.  Turns out my man Russell is bilingual– he can talk to moderns and postmoderns, though not necessarily in the same book.

So yes, I’ve preferred reverse-engineering the Russell Rathbun genius from sermons and other podcasts (this gem with Doug Pagitt is probably the most interesting conversation about church I’ve ever heard).  But of course he’s not writing this book for people like me.  He’s writing for our critics and doubters (most notably Kinnaman’s unChristian), and I’m grateful for that.  And he’s making a compelling case in a book that is the perfect length and the perfect breadth for someone who senses that there’s something lacking in our conventional churches, but can’t quite put their finger on just what that is. 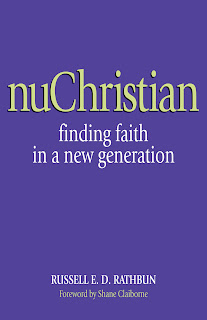