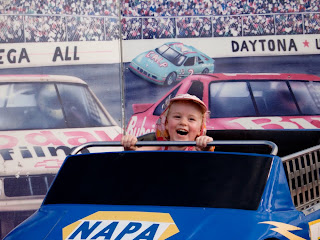 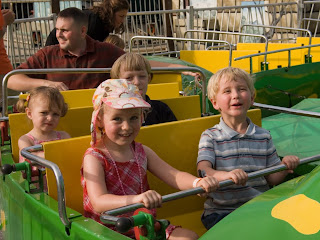 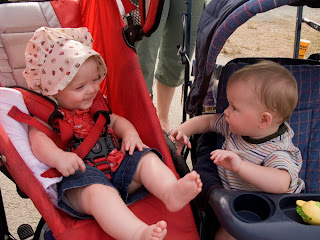 What does one do when it’s 99 degrees and at least that much humidity? Well, go to the county fair, of course. At the kind invitation of Ella’s friend Kieran and Annie Lu’s friend Tristan, we drove out in the afternoon sun to dive into the all-American experience of this great tradition. Which is to say, the smell of sweat, the taste of fat, and the mellow pleasure of second-hand smoke. Add in a few rides that would make OSHA stand on its head, and you’re having a great time.

We grownups indulged in the true pleasure of such places– watching the faces of kids who are utterly trilled by moving in slow circles. And then dragged those same kids along to see a demolition derby (the first two heats of small cars were disappointing, but the two V-8 heats had thrills to spare). I’d never before seen a radiator actually pop, nor witnessed the staggering bravery of the guy who climbed through his windshield to try to blow out his engine fire. Oh, sure, our tender daughter was concerned about the cars ‘playing too rough’, and was right about it being ‘too noisy’ (though she might have been addressing the loud outbursts of her father), but she will get over it. I hope.

All of which was capped off by family funnel cakes with a side order of heady talk about Jurgen Moltmann. Then for the drive home with slumbering kids, an argument in my stomach between the smoked turkey leg and the funnel cake, and daydreams about running the family station wagon in next year’s derby. I’ll bust out the windows myself, and fill the driver’s door with concrete, and with all-wheel-drive, I’ll bet I could take the trophy and the cash in the V-6 heat…