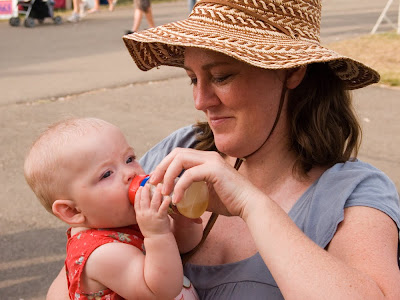 I’ve been aware lately that I don’t write about and celebrate our newest child as much as her brother and sister. Surely this is common for younger siblings, as they are unfortunately lost in the shuffle of the family, and as their accomplishments are overshadowed by their older siblings. Plus we parents can quickly get a case of ‘been there, done that’ and under-emphasize the developmental milestones of our younger kids.

But in spite of my ambivalence, our little baby is indeed growing up. She finally decided to take a bottle, which still feels like a dream every time she lunges her open mouth toward that nipple– after so many deafening attempts to cajole her into taking that which she demanded (but refused), I’m nearly moved to tears each time she enjoys a meal in my arms. And after several weeks of wedging her into her bassinet, we finally broke down and got the crib out of storage to set it up this week. I had expected her to be lost in its expanse, but she fills it out nicely: the little girl is growing up.

Which, upon further reflection, might be why I’m subconsciously shining on her many milestones and developments. Because even as I’m thrilled to see her thriving and interacting with the world, there is a tiny part of me that doesn’t want her to grow up. Even as she– and we!– find new happiness in her regular feedings, I know this is yet another step toward her eventual independence. She is in all likelihood our final child, and I want her to stay tiny so I can nibble on her cheeks and rub her stubby hair and feel the dimples on her plump elbows, forever. She needs to grow up, but I want to keep her small. She’s blossoming before my eyes, but I want to keep her as my baby.

But you go on and grow up, Anna Lucia. It’s good for both of us.