We Are One: The Concert on the Mall 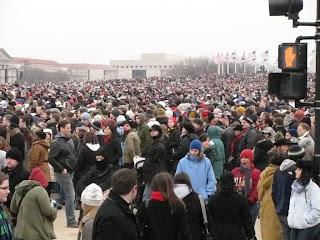 Though we only got as close as the Jumbotron on the lawn of the Washington Monument, it really was a privilege to take in the all-star extravaganza this afternoon. Seeing literally acres and acres and acres of people was somehow inspiring– the grounds looked like an intricate quilt of Americana, radiating heat in the winter chill.

No doubt the highlight of my trip into the city was the company– the inestimable Jon White and his trusty pocket camera (photos, video, and his incomparable commentary to come later this week). Jon is a true believer in the hope of America, in a way that challenges my cynical perspectives. Yet he is also a person who applies full snark to the frequent pretense and falsity of the American mythology. It’s funny stuff– he had the folks standing around us leaning in for his insightful and hilarious whispers– but it is most essentially a quest for truth. So, when Joe Biden got a little long-winded in his tribute to the American worker, most of the crowd had tuned out when Jon quietly reminded me that it wasn’t the American worker who built the US Capitol (as Biden claimed), but African slaves.

There were some serious musical highlights, to be sure. The show started strong with Bruce Springsteen performing his incredible “The Rising” with only an acoustic guitar and a full choir. It was breathtaking. James Taylor shared a bit too much of his “Shower the People,” but John Mellencamp sang the heck out of “Pink Houses” (which took on a whole new power in today’s context). Herbie Hancock led Sheryl Crow and Will.i.am in “One Love”, which had as its strongest moment Will.i.am stepping to the edge of the stage to deliver a delicious rap about racism and his hope for the country and the world.

For some crazy reason, Garth Brooks was given three whole songs to strut around with his nifty hands-free mic, and his flubs of the lyrics on ‘American Pie’ (“them good old boys were singing whiskey and rye”) didn’t go down too smoothly with the crowd, either. But “Higher Ground” put the energy back in the day. Usher (in what Jon and I agreed was one of the strongest performances of the day) led out the lead vocal in an understated but powerful way. He didn’t flinch when Shakira had numerous pitch problems, and he stepped to the background when Stevie Wonder delivered the knockout punch. I’m still humming this song six hours later.

Then, U2 brought the big guns. They mostly cruised through “Pride” as they eulogized MLK and celebrated his hope fulfilled. But they found another gear as the band launched into “City of Blinding Lights”, building momentum before backing off completely with Bono in the negative space of stage right to quietly deliver the final lines: “The more you know the less you feel/ Some pray for what others steal/ Blessings are not just for the ones who kneel… luckily.”

Perhaps the most striking appeal of gatherings like this is the freedom of artists to speak truth to power. So Will.i.am can step to the fore and say what he thinks about racism and America. Bono can alter some lyrics, then speak over “Pride,” making the point that King’s dream is “not just an American dream, but an Irish, European, and African dream”. And then he continued: “it’s an Israeli dream,” and then a pause… “And a Palestinian dream.” Where Obama can’t, or won’t say anything about the current crisis in Palestine, Bono can say something simple about the universal desire for peace and safety, and a half million people can agree as they consider the way that one group’s ‘security’ too often means death and disorder for another group.

But the very best came at the end, when Jon White’s dream setlist wish was fulfilled in spades as Bruce Springsteen introduced Pete Seeger (holding his battered banjo, and wearing a goofy flannel shirt and a hippy stocking cap) to play the full version of “This Land is Your Land,” Woody Guthrie’s musical protest to “God Bless America.” As ever, Pete did more song-leading than singing, as he put both the ownership of the country and the power for change directly in the hands of the people.

4 Responses to “We Are One: The Concert on the Mall”