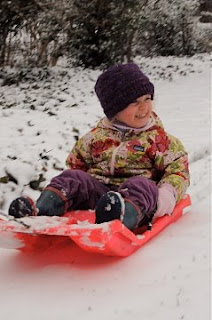 Hat by Tina, photos by The Wife. 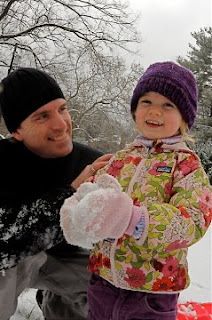 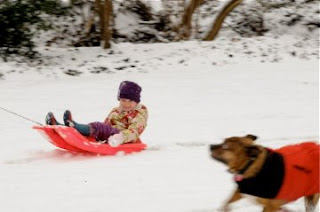 Today was a snow day for us, as The Wife got The Call in the wee hours to tell her that she is ‘on-call’ today. Being ready to bolt at a moment’s notice means that it is rather difficult to leave the house, so we enjoyed a day that was kindly constrained by circumstances.

Unfortunately, the call came in hours that weren’t wee enough to precede the waking of Ella, so we sent mom back to bed and searched for activities to occupy us. Fortunately, it literally snowed today, so we bundled up to head out and perform the initial clearing of the driveway. Ella’s help is still a qualified ‘help’, but she has at least stopped last season’s determined practice of standing precisely where I’m shoveling. Instead, she removes my unsightly banks of snow from the edges of the driveway to build little piles back in the center. Which isn’t so bad, all things considered.

After some sweet potato hash and eggs for breakfast, we undertook yet another home organization project, then had some lunch before heading back out into the whiteness (“What a beautiful day,” Ella said). She took her first trip in a sled, then took some lessons at making snowballs before coming inside for warm milk with her mother while I enacted round two of the shoveling (it is much easier to keep up with my official Caretaker duties when there is someone to help with the caretaking of the kid). A few minutes later the kid was passed out on the couch, milk still in hand.

The afternoon shoveling session was augmented by some more audio from Bon Iver (a kind of Anglicized version of the French for ‘beautiful/good winter’). All Songs Considered is clearly obsessed with them, offering freebies here and here. All of which is lending creedence to the theory that the band is just beginning to live into these songs: I daresay this live stuff is richer and more expressive than the album. More energized, too.

It’s a lovely winter here in Falls Church as well. I just stepped outside for a minute, and the sky is full of damp pellets of snow falling fast, blanketing the landscape in a giant shhhhhhhhh.