New Kids on the Block: They’ve Got the Right Stuff 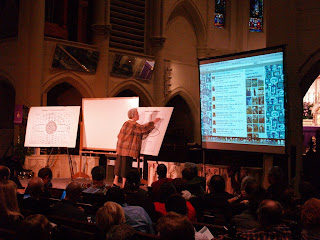 Tony Jones and Doug Pagitt made a splash this past weekend with the debut of their new production company JoPa. And while I knew that it would be a great conference (how can you go wrong with Phyllis as your headliner?), I was astounded at what a great job they did. It was all done with a keen awareness of the variety of learning styles, as they provided opportunities for movement and engagement. Ever since, I’ve been telling anyone who will sit still that it was the very best conference– Christian or otherwise– that I’ve been to, ever. Their planning, recruiting, thoughtful engagement, and execution were amazing, truly delivering something for everyone. It was so engaging that calling the people in the seats ‘attenders’ would be inaccurate– indeed, everyone there was a ‘participant’.

The way I saw this working was in their utilization of at least three channels, and participants were encouraged to switch channels at their discretion and interest. First, there was the channel of straightforward content, which in this case was an engaging lecture from Phyllis Tickle on her arresting and brief book The Great Emergence. The second channel was a kind of ADDish feedback loop, where people could comment on the content, and follow the comments on the content, and contribute comments about the comments, ad infinitum. The third channel (a kind of secret channel, I guess) was a kind of meta-channel, where observant attenders could see the elements of a conference deconstructed and enlivened. So that everything that a ‘normal’ conference attender is looking for was provided, but with so, so much more right alongside and underneath and through it. To wit:

The Content. Everyone likes engaging ideas, presented winsomely and with good humor, and Phyllis Tickle rocks the house in every respect here. Sure, I was disappointed that the conference was largely rehash of what was in her book, but her stuff is so seminal, and she presents it so entertainingly, that I have no complaints. (In fact, PT and Pete Rollins are the only two speakers I can think of who do not frustrate me when they run the same smack as in their most recent book. They are both that good.)

Feedback Loop. Right from the start, the model of active speaker talking at passive recipients was upended. During the welcome and introduction, the ground rules were set: chatterboxes were to sit in the back, whisperers were given permission to do so, and those who would hush the first two groups were put on notice. What’s more, the great public whisper, Twitter, was put to full use. People were encouraged to offer their thoughts at 140 characters at a crack, and all of the tweets were collected into a live feed that was projected on a big screen at stage right. So if you heard something you liked, you could say so. Disagree? Say so! Have something snarky to share? Go right on ahead. The only problem here was that the wifi was overtaxed, and basically inoperable. But in true spirit, when I finally got a signal, I griped about it on the big screen.

Multi-Media. When the tweets slowed down, the main screen was put to good use doing wikipedia searches for whatever the main speaker was talking about. Which was another meta-operation, as you basically looked over someone’s shoulder and saw through their consciousness as they simultaneously listened and wandered around the internet. And those huge visual aids that the speaker used for her talk? They were placed around the room along with pens for comment, critique, and graffiti. Nice.

Pitch Reversal. At every conference, there are people who have been sent by some group, be it a publisher, agency, or sponsoring organization. Naturally, those who have shelled out said cash want a little return on their investment… which leads to the dreaded pitches. Sometimes, authors stand up in the plenary session and make their plea, or give a talk or lead a breakout seminar. Or representatives from an organization do their thing in a similar vehicle for the propagation of their information. But here, it was all adrenalized and reversed. Instead of a solitary person standing up front going on and on while the audience listens uncomfortably, the presenters were put on the spot. They were given firm parameters for their talks: a fixed number of powerpoint slides for a fixed number of seconds, so that they only had a little over five minutes to do their thing. They said their name, and were immediately off to the races. Some tried to race through material, even packing it into their slides, while others downshifted and really showed us the power of their words (Joe Myers actually took time for a short meditation, and Lisa Samson brought the house down with her pure poetry placed underneath the startling photography of her daughter Ty). It was a delicious indulgence to see so much distilled goodness in such a short period of time. And everyone heard every presenter. Genius.

A Panel of Experts. Come back from lunch, and what do you see? A row of stools onstage, waiting for experts who will critique what everyone has heard, right? Well, not exactly. This handful of people were handpicked a few minutes before at lunch, not for their academic or professional pedigree, but because they had all left the church (and several had left staff positions) and were out on the religious frontier looking for something more. So instead of the professionals telling everyone how it is, we had the decidedly non-professionals describing what they see (and the irony that the religious professionals in the audience would have traded their book allowances to get even one of these talented free-agents to darken the door of their church was too good for words). It got even better when the floor was opened up for Q & A, because while professional panelists will always have an answer, even for a bad question, these real people had no such compunction. One guy asked something about ‘a theological quest, or a ecclesiological one?’ and was patently dismissed with well-deserved shrugs all around. Ask the wrong question and get some straight feedback.

Devotionals. Many times, conference organizers will offset the academic main content with some levity and heart by getting someone to lead in some times of worship and/or devotion. We had that too, though our devotional leader was a tall, lanky, elegantly tattooed, sarcastic Lutheran pastor who talked about the struggle of sobriety and mocked TBN and herself at the same time. So that ‘devotions’ became ‘confession’, and an invitation to a fuller, richer life of sacrifice and service. Nadia Bolz-Weber is like a straight shot of espresso– rich, delicious, invigorating, and a little bit bitter. Each time she finished a short talk, you could have heard a pin drop.

Stereotypes, be gone! Emergent church circles get lots of grief for being so young and hipster, but that description was not apt this past weekend. Not only was our main presenter a proud and strong 75 years of age, but there were way more folks over 40 than under (the great Amy Moffitt made this point by having the different age groups read different couplets during one noontime prayer, and the effect was electrifying and gratifying). This cultural shift is way bigger than some (imagined) generational or demographic shell game. Furthermore– and I would not have noticed this if Karen Sloan hadn’t pointed it out (via tweet)– there were quite a lot of women up front. In fact, I can only think of one man who had a microphone for more than a couple of minutes (and he was only responding to the main content). So while lots of people get lots of mileage filleting the red herring of gender inequality in the emerging church, my hat’s off to JoPa for quietly showing us that it’s not as prevalent as people often think.

2 Responses to “New Kids on the Block: They’ve Got the Right Stuff”