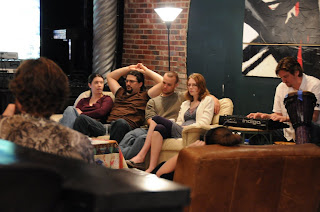 These days, there are many churches trying to swing the theological balance away from systematic theology (and the widely accepted assumption of its dependence on the writings of the Apostle Paul) toward a more narrative theology. To do so, many of us who are not bound to the lectionary have given in to the temptation to basically set Paul aside in favor of the more narrative material from the Bible (eg, Jesus in the Gospel, Acts, and some of the stories from the Hebrew Bible). Our church‘s idea to move forward in this area was to almost force these letters into a narrative by simply reading them. To place them squarely in the middle of their true genre, that of oral tradition. To give Paul his rhetoric back.

It seemed like a scary proposition, since reading them would hardly leave time for reciting the creed, much less a sermon or discussion, and since it’d be hard to fit even one of the shorter letters into an hour. Besides, would modern people have the attention span for that much material?

On the other hand, I remembered back to homiletics class, when we discussed the psycho-social factors found in the book of Philemon. Paul sent this letter to his friend Philemon, and to the church that met in his home. In the letter– which would presumably have been read in front of the whole church!– Paul first flatters, then confronts Philemon by basically shaming him into releasing his estranged slave, Onesimus. From the distance of thousands of years and thousands of miles, it can be easy to read this as quaint and clever, but the social pressure would have been enormous. After all, slavery in that day was a widely accepted and sophisticated practice (there were several kinds of slaves, some voluntary, and many acted as professionals in good standing with their peers and social superiors), and Paul is writing as an only occasional visitor to this particular church. And this is happening in front of everyone– can Philemon say ‘no’? Indeed, he can’t even be bitter or angry and remain in the good graces of the community. And he certainly can’t leave the church or even take a few weeks off– the church meets in his home! It would be like a guest preacher using the pulpit to call someone out for driving a Hummer, or being a gossip, or filling too many plates at the church potluck (“Fred, you’re pushing three bills– what say you send some of that food to the hungry kids down the block?”). Paul might have been a kind and honorable man, but he could pile on with the best of them. Maybe this would be an interesting experiment, I thought, even as I crossed the letter to Philemon off the list.

Our first try was with Ephesians. We did our best to fashion the meeting space into a living room: couches, armchairs, lamps, and end tables. Plus a few musicians sitting around to provide a few musical breaks. The most notable moment came in the fifth chapter, where Paul is laying out his famous household codes. As usual, most everyone missed the part about mutual submission, but nary a parent missed the part about children obeying parents. As if on cue, parents raised their eyebrows, grinned at their children, and delivered some sharp elbows. The kids hung their heads low, defeated again. Until a few verses later, when Paul says, ‘and parents, do not exasperate your children…’ The kids blinked in disbelief and straightened right up and grinned back at their parents! There was, in that moment, an undeniable reminder that Paul wrote to evoke just that response, to deliver a classic bait-and-switch of social expectations. To make sure that, if anyone did miss that line about mutual submission, they’d notice it when the rug was pulled out from under them seconds later. The simple Eucharist that followed our reading, where the elements were passed around the circle of people, was one of the more poignant in memory.

Romans was try number two. We wisely broke this long letter into three segments for three consecutive weeks, and set the room up similarly. Which gave some great opportunity for an interpretive response to the text: blues guitar, wailing vocals, and at least one episode of a repeated musical phrase as Paul repeats himself again and again and again in the central section of that letter.

Even before the letter gets going in earnest, we experienced another remarkable literary device, as Paul pulled us in and sprung the trap. In chapter one, he is making the case that humanity falls short of God’s designs for it, ratcheting up his argument– and getting our dander up in the process– finally hitting his notorious crescendo against all of those terrible people out there: “…God gave them over to shameful lusts… women exchanged natural sexual relations for unnatural… the men also abandoned natural relations…”

On the heels of this, Paul rattles off a list of sins: murder, infidelity, evil, greed, wickedness, slander, deceit, malice, God-hating, and depravity. But he also sneaks a few less inflammatory items into the long list– gossip, envy, boasting, lack of love, and even disobeying your parents– before he reverses the flow of the argument and turns the tables on those of us who just joined him in passing judgment:

Which must have left the first listeners embarrassed and exposed, just as it did for us 2000 years later. Then Paul continues ahead, leaving us gaping at his remarkable rhetoric and feeling the weight of our own sin and judgment, and ready for his good news of reconciliation between God and people, and various people groups to one another. In fact, though many of us were taught to see Paul as a fiery Protestant Reformer, reading Romans for oneself shows such a reading to be a later interpolation– Paul is in fact writing about a radical integration of religio/ethnic groups who had been segregated for generations.

So too in the thirteenth chapter of Romans, which is a popular proof text for Christians embedded in this American Empire. We’re often led to believe that Paul is giving a blanket endorsement of the State as a model of Godly government, but that’s far from the case. For twelve chapters, he’s been building his case for an alternate culture called ‘the church’– a multicultural, multinational, sacrificial, peaceable, and thoroughly counter-cultural band of beneficent rebels of Rome. Jews and Gentiles, putting their allegiance to their Lord Jesus over their loyalty to that other, much more popular ‘Lord and Savior’: the Emperor.

2 Responses to “Reclaiming Paul, In Context”