Choking on the Red Pill 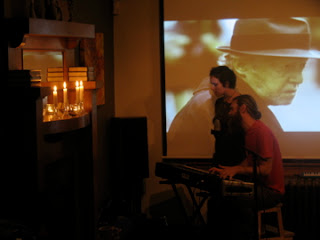 A night with The Cobalt Season makes it temporarily impossible to listen to the radio.

Tuning in a music station leaves you empty, longing for truly good music, performed straight from the heart. Music that is somehow both severe and hopeful.

Switching to the news channel is even more disconcerting, as you try to find some bearings and get dialed back into ‘reality’. It’s not easy, living as I do in a country that stomps violently around the world, demanding its own way like a petulant toddler, but which simultaneously insists that other nations pursue peaceable, diplomatic solutions to their conflicts. A nation that asks young women and men to kill and be killed, then gives these same people counseling so that they can somehow transition from the mindset of a hyper-vigilant killing machine to that of a nurturing parent. A country whose leaders unreflectively spend hours and days splitting hairs about practicing torture in the name of freedom. A nation where people hurry around in their insulative vehicles, rushing to enact their folk religion to reinforce all of this confounding conceit.

Ryan and Holly take us to a place of fearless truth and heartrending beauty. But reentry is a bitch.

2 Responses to “Choking on the Red Pill”