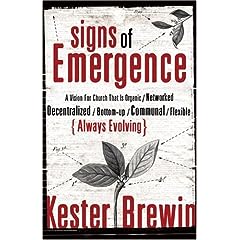 After hearing me lusting after Kester Brewin‘s new/old book, and twisting about whether I should buy a used or new UK version or try to wait until it gets re-released in the states, a friend who shall remain nameless gave me his advanced copy. Now that I’m done with it, I think I’ll buy it anyway, since a stack of printed sheets– while practical for reading, particularly when holding a sick, sleeping child– doesn’t have the proper aesthetic when stood on a shelf. And besides, it is so good that I want to read it again. It’s one of those books about which I say, “oh, this is a really well-written, quick read,” but which, upon completion, I say, “wow, that was really something– maybe I shouldn’t have read it so fast!”.

Brewin takes a broad look at emergence theory, and at the systems and structures which are becoming more prevalent in our larger society, applying them to both the incarnation and the church. He sees contemporary ‘self-organizing systems’ as akin to the way in which Jesus’ reconstitution of the Jewish religion set those who would follow God on a new, decentralized journey. And he does so with the wise, European recognition that the term emergent is both passe and genuinely descriptive of much deeper sociological and epistemological changes.

He’s the first writer I’ve seen with the courage to apply James Fowler‘s Stages of Faith to this emerging church conversation. Which is doubtlessly pejorative, and arguably unkind, and quite modernist and therefore non-emergent, but I think he’s right when he suggests that the ability to deal with complexity and embrace paradox and live in tension is a sign of greater personal and faith development. It’s certainly been the case for me, as I fight an immature tendency to trade one form of fundamentalism for another– albeit cooler– one, and to replace my old foundationalism with an equally rigid– yet apparently open– brand of epistemological humility.

Two things stood out especially. The first was the way in which God has given us not a formal religion, but something more akin to a virus, and how we– like Judas– want a system, a structure, a power that will overcome the forces set against us, and which will do so from the top down. The other nugget that shone for me was the final chapter on ‘Dirt’ and the importance of tricksters, those self-sacrificial people-cum-prophets who push the boundaries to remind us that life and faith are messy, dirty, and real.