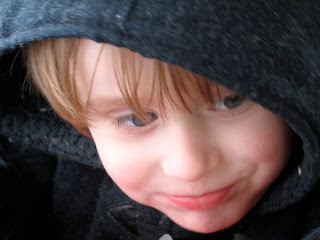 My buddy Levi is one hip dude: he’s got the sweet shag haircut, the biggest backyard in the world, and a couple of relatively cool parents (though they’re getting awfully Norman Rockwell– his mom started canning her own jelly and his dad now plays on a softball team). Levi eats grilled cheese SANDwiches and goes pee-pee in the toilet (though not generally at the same time), and knows all about refrigeration and legos. Ecclesiologically, he’s post-protestant, post-liberal, post-congregational, and post-emergent: after spending the morning at SEFC and then visiting a mock-up of one of Father Marquette’s bark hut churches on Mackinac Island, we suggested a brief stop at an historic Episcopal church across the street. To which he responded, “Not another church!”
But when you’re three, you don’t always get what you want. 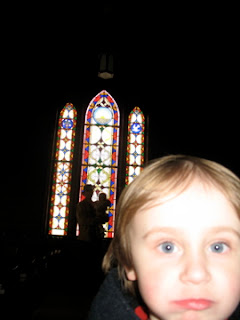 One Response to “Too Cool”