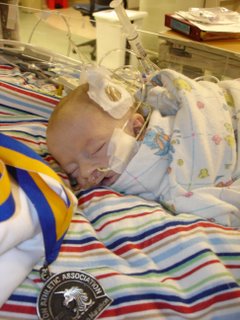 Yesterday, at 10:20, Will was extubated and started breathing on his own. The crowd in the CICU cheered, and he looked really good. At first, I approached the situation philosophically and metaphorically, noting that his heart rates and resp. rates were nearly identical to his Dad’s when running a marathon. It was hard to watch him work so hard, but I felt an affinity with him, and cheered him on. But after five, six, and seven hours, the metaphor reached its limits, and I found myself exhausted as I watched his pulse fluctuate between 150 and 170, and his chest expand between 60 and 70 times per minute for hour after hour. Then I felt guilty for feeling exhausted myself, when he was in fact doing all of this work, running to stand still.

We stepped out during shift change (7-8 pm), and were shocked to return to him holding his own. Pale and weary, but soldiering on with steady blood gases and a determined spirit. When I left the CICU, I cried tears of empathetic pain mixed with tears of joyful pride as I marvelled at this tiny boy. We could hardly tear ourselves away from the hospital, and so stayed in the waiting room for a few more minutes. Finally, after 11 hours of breathing on his own, he declared his exhaustion and was re-intubated. Our slight disappointment at this (not unexpected) development was tempered by the knowledge that he (and we!) would rest a little easier overnight. He was back on his minimal vent settings, and doing quite well when we said ‘goodnight’.