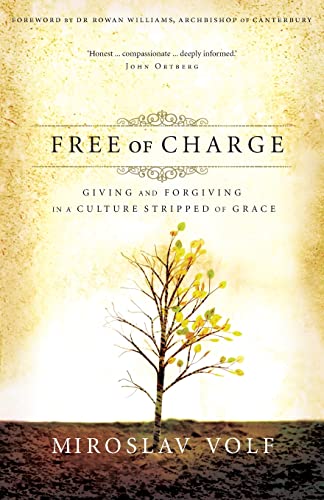 The last session was where we discussed Free of Charge, MV’s excellent book which grounds our giving and forgiving toward others in God’s generosity and grace. Which Zondervan provided for the cover price (free!) to all of the attendees, and which I wish they would do for everyone, since it is such a great book. But MV gots to keep himself in black turtlenecks, so fair is fair.

He kicked things off with the assertion that ‘individuals’ do not exist- this idea is a fictional construction. On the other hand, we exist as ‘social selves’. So, for example, when I toured the Holocaust Museum today, I was aware that I had not myself participated in this attrocity. Yet there is a sense in which I did play a part in the systemic cycle of retribution and violence that birthed it.

A comment came up about how these ideas from MV are not about ‘content’, but ‘relationship’. “We’re betting the farm on relational theology,” said the questioner. MV responded that we need content and procedures both. Churches have been obsessed with what they believe and have forgotten about procedure. He suggested that we bracket off ‘content’ and concentrate on the sensibilities, values, etc. that we apply to our procedures.

A further question followed-up on this interesting line of thought. A comment about how many of the people gathered in the room had taken a lot of heat because their beliefs do not pass the various doctrinal litmus tests which are floating around out there. “A lot of us believe that relationship and procedure (how we hold and express our beliefs) is more important than what we believe.” Could MV give us some idea of where this value of doctrine over relationship has come from? Is there a period in church history where we see it’s root? I loved this question, and found myself leaning forward to carefully absorb its answer.

What followed was most compelling. MV paused before he answered (as was his habit), and smiled at the questioner, and kindly said, “this is not a helpful line of inquiry. We cannot give a genetic account of this pheonomenon.” And in the days that followed, I realized the truth: the ‘us’ in the room were guilty of the very thing that we were accusing ‘others’ of. Feeling excluded by those who were waving some doctrinaire flag, we were hoping to find some historical, logical, or doctrinal flaw in their reasoning. The brilliant and gracious Miroslav Volf discerned this, and kindly pointed us toward a better way.

As he continued on, MV noted that thinned-out Christian theologies are most prone to misuse. So, as he had done each day, he admonished us to think theologically and carefully about everything, and move forward with courage and deliberation. Furthermore, he noted that sentimentality combined with gracelessness (harshness) is a major cultural problem. In the case of the sentimentality, we see an inability of people to draw boundaries, and/or a tendency to ignore differences between people. Gracelessness is seen in the excessively punitive nature of our interactions. God’s way is quite different. Grace wants to assert benevolence, even as such grace contains an element of condemnation. So, for example, to say to someone “I forgive you” is to tell them that they have sinned (particularly if they haven’t yet seen their offense!). In this way, gift-giving and forgiveness (which are two fundamental elements of grace) affirm justice, even as they demonstrate grace.

In this vein, when giving gifts, the ‘how’ is as important as the ‘what’. At the same time, ‘amounts’ are not unimportant. How much of our church/national/personal budget goes to people outside of our concern? Are we giving generously, as God gives to us? And MV defined ‘generous giving’ as ‘to give just a bit more than you have hope of receiving’.

As he closed our time, our kind conversant took a few questions about violence. He said that he sees the NT as a renouncement of violence. “The cross is the last case of retributive violence.” Here, he reiterated his conviction that we not excise anything from the Bible; that we not domesticate its message. As he concluded, he returned to one of his opening themes of ‘theology as subversive’, and calmly pronounced the war in Iraq as immoral. Those who would ‘fight terror’ and those who would resist such retributive violence have a huge task ahead of them– both are not fighting a ‘beast’ which could be identified and attacked, but a ‘blob’ which absorbs the blows and the efforts of those who would resist it.