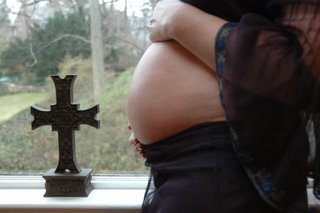 Another full day at Children’s Hospital yesterday, where we switched up the order: cardiology first, followed by comprehensive ultrasound, followed by a 3-D ultrasound of our boy’s face.

My heart was in my throat for a second at the beginning of the echocardiogram, as the sonographer searched in vain for our son’s two-chamber heart. Seems she could only find a four-chamber heart. While she scanned the uterus again, I wondered if God had given us our miracle and fixed the whole mess… I dismissed the thought just before she said, “oh, here it is”. It seems that both babies have moved around a fair bit, and so she had a little trouble getting her bearings on who was whom in the womb.

Our son’s heart is roughly the same as three weeks ago, except for the new added finding of a leaky valve. Which sounds like it might not create much additional concern, provided it doesn’t get any worse (when you’ve only got two valves, a little backflow of blood can become a big problem when it makes a lot more work for the heart). He will need to be about as strong as he can be (with the rest of his cardiovascular and pulmonary systems at nearly full strength), and stay healthy in utero as long as possible, if he’s going to have a fair chance to survive the first two of his heart surgeries.

The sonogram showed good growth and development in both kids, with our boy behind, but keeping pace with his sister’s growth curve. They are both active, and figuring out just which arms and legs belonged to whom proved to be a bit of a challenge. But they both seem to have just the right number of fingers and hands and toes and feet and organs and everything else.

The 3-D ultrasound was intended to give our expert doctors a good look at his face so that they could try to identify a systemic chromosomal syndrome. And once again, our overly active boy was a little less than cooperative. The ultrasound machine would capture about 5 seconds worth of data, then build a computer model of the structures of the face. Which doesn’t work so well when the little guy puts his hand up to his face, or opens his mouth, or shakes his head, or turns away from the transducer. But the two partial images combined with the 2-D information seemed to dissuade our geneticist’s surety with regard to trisomy 13, while the likelihood of other syndromes remain in question.

Because we were able to get a couple seconds of time where he stayed still, we were given a priceless gift: We were allowed to enter into our son’s world and glimpse a tiny angular peek at his downturned head, and part of the left side of his face. We saw one handsome closed eye. His full rounded cheek. Most definitely his father’s forehead. Part of one gorgeous ear. Only just a partial glimpse of his nose and mouth and chin. And the half of his face which we were able to see, in spite of the wide, bi-lateral cleft lip and palate, is truly and strikingly beautiful.

Bottom line: more waiting, and watching. The main goal now is to keep the kids growing (we hit a new high of 161.72 grams of protein in a single day!) and to allow their lungs to develop as much as possible (key lung development happens between 30 and 35 weeks gestation) before they make their appearance into the world.

And as they grow, my love for them grows, too.