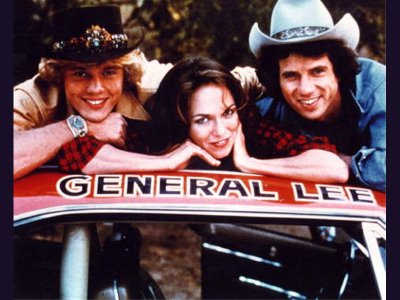 Last night, I was watching a retrospective of one of the most significant cultural movements of the early-eighties: The Dukes of Hazzard. The documentary took a particular interest in that well-known phenomenon found at the very beginning of the series, whereby the county of Hazzard was depicted as a brothel-loving, moonshine-running, corrupt, and proudly immoral collection of inbred, back-woods hicks. They all swore and slept around and drank beer for breakfast and drove 150mph. Heck, Sheriff Roscoe P. Coltrane even busted a cap in somebody. It was really rough (and it was this Hazzard County in which the recent film dwelt and dealt).

In fact, the first five shows were filmed in Georgia, and carefully followed this Friday night at 9pm ethos. Until about ten shows into the first season, when it became clear that the show was more than wildly popular with almost every kid in the country. What would the producers do? Would they continue to pump this poison into the moldable minds of the masses? Would they go on their merry way, eroding their audience and giving away perfectly good money?

James Best (who played the Sheriff) remembered approaching the producers and suggesting that the show go through a major transformation. The good guys would become pure, the bad guys would be bumbling, and Daisy would stand in the background more. And that is what happened: Cooter shaved his beard, Uncle Jesse stopped stillin’ ‘shine, and Boss Hogg never closed another dirty deal. The show moved to 8pm and cleaned up its act. The tail started wagging the dog.

Now, I can’t much complain, for I was one of those kids, and I might not have been able to watch it had the Dukes not transformed themselves. In any event, Dallas came on at 9, and my mom wasn’t about to miss that.

The day before yesterday, I was listening to my friend Craig’s blog/podcast, where he interviewed Emergent Pope Tony Jones. In that recording, Tony suggested that, for he and his friends, theology is not a static and staid quest for final answers, but rather a fun, interesting, adventurous conversation filled with arguments and challenges. He went on to suggest that our theologies ought to grow– to expand to include new experiences, thoughts, and information. True, that.

When I was a seminarian, theology was more like that. We realized that our developing theologies were very serious, and would be critically important for our lives. At the same time, slouching from class to class, we knew that we were inescapably puny peons compared to our stellar teachers. We would never, ever achieve their accumulation of knowledge, much less their intellect. And we knew that no one really cared what we thought (at least not yet). So we listened, and read, and questioned, and tried on this system of thought for our morning class, and then that system after lunch. We bounced from OT to NT, from Prophets to Synoptics, from Ethics to Pneumatology. We picked our jaws up off the floor as our teachers propounded far-fetched theories about authorship of Song of Songs, delivered lectures about evangelism that were much more like sermons, confided their true feelings about terms like ‘inerrancy’, and hinted that Jesus might not be coming back. It was fun, because we allowed our various professors their eccentricities, free-floating passions, and theological axes to grind. Many of us were a bit unsettled by some of this grand adventure, but we knew that we didn’t know much anyway, so it didn’t much matter.

Of course, when we got out of school, things changed. Most of us went into the professional pastorate, where folks started knocking on our doors, looking for answers. Answers that we didn’t have, and knew that we really couldn’t obtain. Which is not to say that they weren’t out there, but simply to say that our puny minds couldn’t contain them. I mean, if Murray Harris allowed a bit of mystery in his exegesis of the Resurrection (to the outrage of Norman Geisler), then what was I supposed to say? If my two world-class OT profs couldn’t decide if the universe was made in seven days or seventy millennia, what was I to think? If church history was half as perspectival and contentious as I learned, then how could I trace some thread of orthodoxy through it?

Well, I did what a lot of us did. I tried to find some middle ground. I embarked on the theological adventure in my study, but but made sure that I was standing still when I arrived at the pulpit on Sunday. I left my fat books on the shelf and bought Billy Graham’s Book of Answers so that I could provide ‘clear, practical application of Biblical Truth to life’. I talked less about mystery and more about certainty. Fewer questions, and more answers. That’s what people were looking for, or so I thought.

One of my profs from those Divinity School days writes about this phenomenon in the area of eschatology (here), whereby the wildly popular “Left Behind” series of books persists despite the almost complete lack of credible scholarship behind it. Because that’s what the people want. I saw the same thing in many areas, especially as folks tried to limit the work of the Holy Spirit to something more predictable and comfortable (never mind that any NT scholar worth his salt would say that Paul The Apostle saw miracles regularly, and expected them to continue indefinitely).

The tail was wagging the dog.

Because we wanted to keep our jobs, and because people seemed to soak up our fill-in-the-blank guides to life, we assumed that everyone was looking for simplified answers. But when I took the time to listen, I heard something different: folks were quietly dissatisfied with all of this business. Sure, they were scared of the larger adventure, but they knew that this modern map was all wrong. And it was not, as some people suggest, a tendency of youth. The oldest people in the church would, in moments of candor, admit deep doubts about life and God and how they understood the Bible. Their ultimate faith in God was stronger than ever, but they were holding on to everything else more loosely. Because they had seen many of the darker parts of life, and experienced God as a loving and robust fellow traveler and not some kind of Trinitarian rescue team.

Like a paper umbrella, complete answers and comprehensive theologies are satisfying until the storm clouds come. Then, we scramble to avoid blaming God for the very thing that he would want to endure with us. We blame ourselves for our ‘lack of faith’ when we consider our own death and admit that we still have a few questions about exactly what will happen when our heart stops. We blame our pastors for not admitting their own shortcomings and lack of certainty.

So bring on the theological adventure. Let’s talk and argue and say stuff like “I never thought of it that way!”. Let’
s put down the hot ‘heretic’ brand and try to learn something from each other. Let’s explore and stretch and allow ourselves to change our minds and not take ourselves so danged seriously. Let’s recognize that the people of the Bible were much more like the residents of Hazzard County (original version) than TBN. Let’s put our faith in Yahweh alone, and not in human constructions of thought about him. Let’s admit that Jesus lived a very human, quite messy, occasionally doubt-filled, and yet very compassionate and Godly life. And let’s try to do the same.

So here’s to true theologians. May they ever and always do the work of Bo and Luke Duke–
“Just two good old boys,
Never meanin’ no harm….
Beats all you ever saw, been in trouble with the law,
Since the day they was born…”

and may they, with Bo, Luke, Daisy, Uncle Jesse, Cooter and The Prophet Isaiah, continue in their work of

“Straightenin’ the curves, flattenin’ the hills,
someday the mountain might get them, but the law never will…”

Posted in: eschatology, stake in the sand

8 Responses to “Fightin’ the System”