Farewell to a Friend 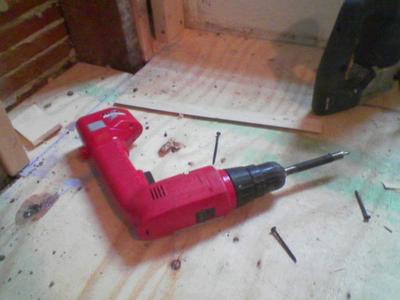 My beloved cordless screwdriver has begun its long, slow decline toward death. My beloved drill, which has served faithfully through use and abuse, through heat and cold, and through dust and sweat. My beloved drill, which was given to me by the wife over ten years ago.
Her batteries (the drill, not the wife) don’t take enough charge and then don’t last nearly as long as they used to. So she limps through the day, gasping for breath. Unaware that these batteries are obsolete, and therefore, so is she.
Yesterday, I snuck a few glances at amazon, and was relieved to see that a replacement is only one click away, and much cheaper than ten years ago. Almost certainly a better tool, too– more powerful and more useful. And with one of those handy flashlights included, too. But it comes in some weird plastic case, and I like my old metal case, which makes a handy (short) ladder, comfy lunch seat, and a perfect place for bits and screws and stuff. Plus, this new drill isn’t my drill, with all of its wear and service and history and love.
I like new and shiny as much as anyone, but there is a lot to be said for tried and true. A friend who is predictable and loyal. A known quantity.
It would be easier if there were some catostrophic failure which rendered my friend useless. Then, I could just have a funeral, say goodbye, and move on. But like a lot of things, this won’t end like that. There will be a long decline (which probably started months ago), an extended denial of the problem, and a reluctant acceptance of reality. I’m sure I’ll drive a few more pounds of screws and limp along with my old friend while making excuses for her poor performance. Because for most of us, anyway, life keeps going on, and we keep making the best of our shortcomings and disappointments and inevitable decline.
And I know that when The Day comes I won’t have the heart to actually throw her away. I’ll probably abandon her outside some hardware store or send her to tool heaven in some recycling program.
Farewell, faithful friend.