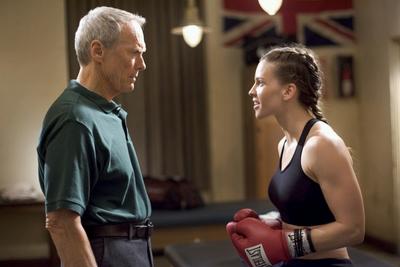 Apparently, the wife and I are the last people on the planet to see Million Dollar Baby. So I’m speaking to no one in particular when I say that if you are feeling generally depressed and are looking forward to a little attitude uplift, this is not the film to watch (we were both sobbing at the end…). Still, a truly great film.

I was really taken by the prayer which Clint Eastwood’s character delivers. He kneels by his bed with some effort, crosses himself, and says,

“Do your best, Lord, to protect Katy. Annie too. Other than that, you know what I want. No use me repeating myself.”

Which strikes me as an honest prayer, and one which is– in spite of appearances– full of faith.

But most notable was the way which the prayer scene was framed with the narration of Morgan Freeman’s character. As Eastwood is kneeling, he says, “…sometimes, the best way to deliver a punch is to step back.” And as he is standing back up, the narration concludes, “…but step back too far, and you ain’t fighting at all.”

I’d like to be able to “pray without ceasing”, and petition God like the widow in Jesus’ parable. At the same time, repetition for its own sake might betray a certain lack of faith. And I’ll admit that there are topics for prayer which I’d really rather not revisit again and again– they are too painful, and only fuel the fire of my discontent. I guess the challenge is to stay in the fight and stay engaged– to be honest about my hopes and dreams, and mindful of God’s ability to change things.