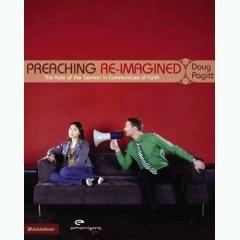 So I had promised to do some blogging about Pagitt’s new preaching book, which I got in the mail last week. But I haven’t been able to finish it yet, because I’ve been thinking about preaching so much.

On most Saturday mornings for the past four or five years, I’ve been going for runs with my club. We get together at the same place just across the river from DC, and do a variety of runs for a variety of distances. Since I’ve started attending, we’ve had at least three official leaders, plus substitutes, and each leader handles the preliminaries differently. Everyone makes an announcement or two, and welcomes any new people, and reminds everyone that they are welcome to come to breakfast afterward. The major variable is the description of the route. We use a repotoire of about thirty routes, adding a new one every once in a while, or perhaps doing some variation or combination. Some follow trails, others go through the city, and quite a few are a very involved combination of both. In almost every case, the routes are announced and described on the website well beforehand, and printed cue sheets are available on Saturday morning. But the cue sheets kind of dematerialize when subjected to heavy rain or substantial sweat, and so there is usually some concern about making sure that folks understand the route.

Here’s where things vary quite a bit. Some leaders will say, “take one of those sheets,” and they describe the bare outline of the route. Other leaders will talk folks through the sheets, giving very detailed directions for five or ten minutes. And still others will land somewhere in between.

Now, I don’t want to minimize the fear that comes with not knowing the route. When one is getting started with these runs, it is no small concern. Indeed, when the weather is very hot or very cold, getting turned around can be a dangerous thing. Even so, getting lost is a kind of rite of passage for every regular attender. You hate it when it happens, but you laugh about it later (hopefully not in front of a person who happened to get lost that day).

What I’ve noticed is this: no matter how detailed the description of the route, a person unfamiliar with the route invariably follows the group at the start, sorting themself according to speed/pace, and starts querying those around them about their familiarity with the route. If they can’t find someone who is willing/able to show them the route, they will either run ahead or slow down and find someone who can. Because trying to describe (much less memorize!) an intricate route with its dozen or so cues in the abstract is almost impossible. It is much better to find someone who will make the journey with you. Even better than that is to find a group of people who can guide you through the territory, making any necessary adjustments along the way (due to impassible trails, or traffic, or dehydration, or injury, or whatever comes up).

A lot of preachers get up in front of their congregations each week and try to do the huculean work of laying out the path for each person in their congregation. Because the communication is one-way and exhuastive, it is frequently overwhelming and exhausting for everyone concerned. What works better is for folks to find a friend who has travelled the path before, and can help them. Or– even better– to put a few people together, each of whom know parts of the route, and who can contribute toward the successful journey.

Does that mean that the leader is going to have to give up their seat of authority, and pulpit of power? Yup. Will some people squawk about the absense of “clear teaching”? You bet. Will individuals will get lost every once in a while? Absolutely. Or will whole groups of people will get turned around for a time? Definitely.

But I wonder if the exhaustive speech ever changed anyone, anyway.

5 Responses to “Finding Your Way”