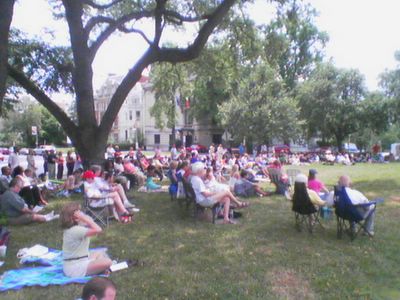 We went today with the Brick family, and had a very nice time. They hosted us, scouted parking for our group, and had us over to their cool place in the city afterward for tea and cookies. Most civilized, to be sure.

We gathered at the traffic circle right adjacent to the Sudanese Embassy, and so the thing had a much different vibe from the past two I’ve attended. First off, the venue disinclined any of the invited Sudanese speakers from attending. I guess they were understandably concerned about speaking out right in the shadow of Sudanese sovereignty. So that added a little tension, and took away from the event as a whole. And too, there were several uniformed Secret Service officers watching the proceedings with a certain interest. I suppose their presence is SOP for any assembly on Embassy Row, but I felt a little anxious about this as well. Especially when someone mentioned that many people have been arrested there for demonstrating.

Arrested? Whaaa? Well, I don’t want to get arrested! I might need to throw up my hands and hightail it home if it comes to that! They wouldn’t arrest me, would they? What does a person have to do to get arrested?

And then it sunk in. No, I didn’t need to panic– I probably wasn’t in any danger of being arrested. I would, however, need to take out my scarlet ‘H’, and own up to my hypocrisy. Here I was, taking a stand for justice, afraid of a little incarceration. Why, I’m theoretically here to protest the torture and imprisonment of thousands of people. The rampant rape of millions of women. Not to mention the murder of millions. And at the first sign of opposition, I’m ready to hurry to my safe little home with my tail between my legs. Nice.