They say you should run with people who are faster than yourself. Which never made sense to me, for it seemed that someone would either be going faster or slower than they liked. But I think I discovered the secret: fake it.

Due to a sudden onset of painfully tight hip flexors in the fall of 2003, I stopped running, crossed my arms, and cancelled my plans to run the Chicago Marathon. I commemorated The Weekend That Might Have Been with bitterness, but when I got the blank results card in the mail a month later, I decided to mount a comeback.

To make a long story short, I basically spent two years training for one marathon. And I did most of my weekend long runs with the DC Roadrunners. Because of my relatively high level of training, I was able to keep up with one particular group of guys, especially Dave and Steve. They were (and are) much faster than me, so I would rack up miles early in the week, rest up on Thursday and Friday, and give Saturday morning a full effort. Week after week, I would paste a relaxed look on my face and run with nearly everything I had. And occasionally, I would lead out for a stretch on our way to the finish, invariably getting passed before the end. But then, three weeks before Chicago 2004, I actually held Dave off on a 13 mile run. Nearly run over by a car, I was nevertheless feeling triumphant and eager to run the marathon, which I did in just under three hours. I was very grateful, and very happy. 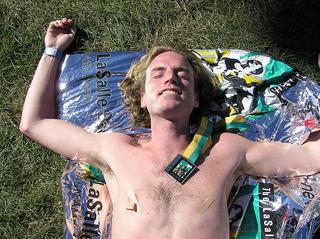 And my buddies were impressed. They thought I was some kind of dark horse who held back, only to demonstrate his mastery when the race was right. When in reality I had, by some combination of luck and determination, run the race of my life.

Still, I’m not that old, and so retirement seemed premature. Plus, these guys started talking about training together for the Great-Grandaddy, Boston. I’d been there in 2003 and gotten my ass handed to me, so I was reluctant. On the other hand, I was tempted to make a bid for redemption. My wife approved hotel and registration expenses in January, and I was back in the swing.

We ran together through the bitter winter, sometimes adding extra miles to our already-long runs by starting in the dark. Always supportive in that quiet, manly way, we kept each other going through injury, laziness, boredom, and one particularly disastrous (for me, anyway) 21 mile run from Shirlington to Reston.

Boston Monday dawned bright and clear, and I met up with Steve to ride the bus to Hopkinton, which is an amazing experience in itself. Every body, disciplined and trained, brimming over with potential energy. Every stomach doing flips. Every brain trying not to think this menacing thought: “This trip is taking forever– how am I ever gonna run 26 miles?”. Every soul looking forward to the singular experience of shutting out every worry, every distraction, every thing, save this: go. 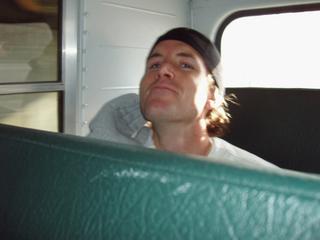 Steve snapped this photo of me in the very back seat, feelin’ the flow. I wish I could experience that every day. 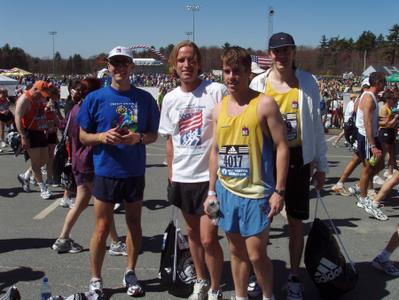 And here we are, headed to the starting line. That’s my man Tom on the far right. He very patiently trained and qualified for this opportunity. He has drug me through many a training run, and beaten me in plenty of races, so I was honored to be there with him.

Dave (near right) is ready to go, fresh off of a blistering Cherry Blossom. I still can’t quite comprehend his 59:17, and his 10K split in that race is faster than any 10K I’ve ever run. He graciously paused to run with me in Boston at the 4 mile mark before going on to finish in an impressive 3:12:14. He is a home-town Boston boy, so he had fans all along the course to cheer and resupply him.

Steve is there on the left, fulfilling a dream. One year before, he had run the final 6 miles with his sister as she finished Boston, and it lit a fire in him. So he showed up to the Saturday runs and got to work. On one of his first weeks, I remember dragging him through a 14 miler, but that was the last time I saw him struggle. He qualified at the Marine Corp Marathon with time to spare, and blazed through an amazing Cherry Blossom, too (1:00:27). In Boston, I saw him on Heartbreak Hill before he pulled away to finish in 3:17:29. When I talked to him afterward, he was wearing a dazed, pained grin, and his black shorts where white with salty sweat.

Me, I ran 3:18. I was disappointed to finish behind these guys, but that’s only fair. After all, they are faster than me.

One Response to “Fast Company”