Freedom has a scent… 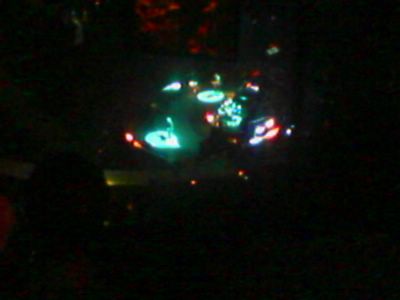 U2′s Philadelphia show was really beyond words. Honestly, I shouldn’t say anything about it. But at the same time, I just can’t shut up.

The day was quite an adventure. We had a nice drive up. Got into town, happened upon a cool Belgian bar where my beer guide Ross got me into one of the very best beers I’ve ever had– a Chimay (made by Trappist monks!). Plus an Andouile sandwich makes Mike a happy boy. Afterward, we were enjoying the sunny sidewalk when Ross said, “hey, there’s our car being towed!”. We ran down the street to find out what was happening, and to try to pay the fee or whatever so that we could get to the show. No luck there, though the driver did let us pillage the car for our precious tickets. We grabed a cab quick, piled 6 of us in, and said “follow that car!” (we actually used those words). Thirty minutes and $100 dollars later, we were on our way.

As the concert opened, I kept thinking about worship, and preaching. For U2 are, I believe, some of the best preachers on the scene today. Using intellect, emotion, ambiguity, certainty, contradiction, irony, love, and anger to move the audience to see themselves and God clearly. And what I saw more than anything else was their use of restraint. Instead of putting 100% energy out at all times, they regularly, carefully hold back, allowing the audience to participate– allowing us to preach the message ourselves. So that we sing the words of Scripture. So that we think the thoughts of God. So that we pray to him ourselves.

To see Bono sit at the edge of the stage and draw people in, singing:

One Response to “Freedom has a scent…”