Farewell to Freddy and Bubba 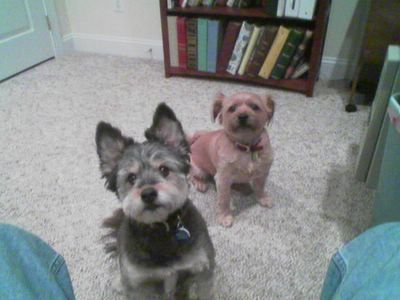 There they are, my best buddies over the past week. And this view is almost exactly what I see anytime I look down. Even the orientation. That’s Freddy in the front, extra-eager for attention. Bubba plays it cool in the background.
I like them both, but I definitely feel more of a sense of comraderie with Bubba. First thing in the morning, Freddy races down the steps, spinning circles on each landing until I get there. Bubba calmly walks about a step behind me. What’s the big rush?
Bubba and I like to start the day with a contemplative cup of coffee, and maybe some reading. Freddy rushes around the house, sniffing every little thing that was there yesterday, and the day before.
On walks, Freddy strains at the leash, while Bubba conducts himself with a bit more dignity. When I’m cooking something in the kitchen, Freddy finds a way to place himself right under each of my steps. Bubba observes from a distance.
Freddy will jump on the treadmill and run nowhere, for no apparent reason. Bubba just sits and shakes his head. And anytime anyone speaks, Freddy comes running, sure that he’s being addressed, because the whole world surely revolves around him.
After tomorrow, I’ll move back home. And I have to admit, I’ll miss Freddy’s enthusiasm and zest for life. It’s really growing on me.
Besides, Bubba likes to sniff his own poop.